When my aunt Tina drives up the hill at St. Mary of the Springs on her way to work at the Martin de Porres Center, she passes an Ohio Historical Marker that commemorates two significant aspects of the state’s past.

On one side, the marker describes St. Mary of the Springs Academy. In 1830, the Dominican Sisters founded a school for girls in Somerset, Ohio. When its buildings were destroyed by fire in 1866, Columbus businessman Theodore Leonard donated land and bricks to rebuild the school in Columbus. In 1868, St. Mary’s Academy was built on property which included natural springs, so “of the Springs” was added to its name. The school educated young women until it closed in 1966. 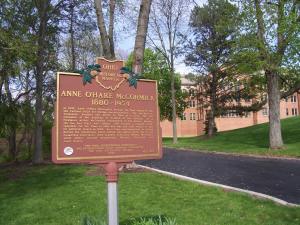 The other side of the marker proclaims the accomplishments of one of the Academy’s distinguished graduates: Anne O’Hare McCormick (1880-1954). In 1937, she became the first woman to win the Pulitzer Prize for foreign correspondence.

Tina included McCormick in a presentation she gave on the Pulitzer Prize to her fellow Sorosis members last month. She suggested that I learn more about this former Columbus resident who was honored for her outstanding achievements in journalism.

Anne Elizabeth O’Hare was born on May 16, 1880 in Yorkshire, England. Shortly after her birth, she and her family moved to Ohio. Growing up in Columbus, Anne lived at 216 22nd Street and attended St. Dominic Parochial School until 1893, when she became a student at St. Mary of the Springs Academy. After Anne’s father, a life insurance regional manager, left his family, her mother, Teresa, ran a dry goods store and lived with her three daughters at 1009 West Broad Street. Mrs. O’Hare also self-published a poetry book called Songs at Twilight (Columbus Printing Co., 1897), which was dedicated to Rt. Rev. Bishop John Watterson and includes a poem to him.

In 1898, Anne graduated as the valedictorian from St. Mary of the Springs Academy. Later that year, she and her family moved to Cleveland and she began working for the Catholic Universe Bulletin. She continued working there until she married Francis J. McCormick, a Dayton engineer and an importer of industrial equipment, in 1910. 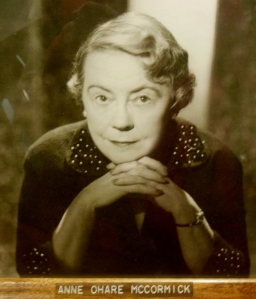 After her marriage, McCormick traveled extensively with her husband. She also wrote poetry, freelance magazine articles and St. Agnes Church, Cleveland, Ohio: An Interpretation (Martin Printing Company, 1920), a history of her parish church in Cleveland.  In 1920, she not only sold the New York Times a sonnet for $3.50, but also pitched the idea of sending the Times some articles from abroad. After successfully giving it a try, McCormick became a foreign correspondent for the Times in 1922. Reporting from Europe through her thrice-weekly column, “Abroad,” she interviewed Benito Mussolini, Adolf Hitler, Neville Chamberlain, Winston Churchill and Josef Stalin. The dispatches and feature articles she filed from Europe in 1936 are what earned her the Pulitzer Prize.

McCormick gained a reputation not only for her knowledge and insight about current events, but also for her compassionate nature, her respectful, well-mannered ways, and the curiosity that made her a life-long learner. Whether she was interviewing influential leaders or average citizens, she treated everyone the same. She was able to establish a rapport with people, to make them feel comfortable talking to her, and to be a good listener. She did not take notes during interviews, so she would not make her subjects feel uneasy. As a result, her writing was more like a conversation. These qualities are said to have prompted Franklin Delano Roosevelt to agree to several interviews with her. You can read many of this curious interviewer’s reports on her conversations with F.D.R. in The World at Home.

In his introduction to The World At Home, fellow Times journalist James B. Reston described McCormick as a reddish-haired, stylish and feminine woman who was quiet and kind, with the sparkling spirit of a lovely girl. McCormick’s modesty belied her influence as a recognized expert on current affairs who won several awards and honors in addition to her Pulitzer Prize. She loved being a reporter who covered the top stories of her day. She also derived great inspiration from her Catholic faith.

McCormick had a flair for journalistic storytelling. “Vast Tides That Stir the Capital,” from May 7, 1933 and included in The World At Home, offers a sense of what an exciting place Washington must have been for new politicians working with great momentum to reconstruct the country. Similarly, her ability to foresee the coming of World War II is evident in her June 21, 1936 “Abroad” column. “The face of the world has changed,” she wrote. “You walk familiar streets and they are strange. People everywhere are like houses with the shutters down, withdrawn and waiting, as if life were held in suspense; or they are quarreling within their houses, hating one another because long-drawn-out uncertainty has rasped their nerves to the breaking point.”

During her career, McCormick kept in touch with St. Mary of the Springs, corresponding with two of her teachers and contributing “Journalism as a Profession for the Convent Graduate” to the school’s 1917 yearbook. “It must be remembered that it is only in recent years that [journalism] has been a field at all hospitable to women workers,” McCormick wrote. “Women writers languish over the Society column of the daily newspaper. They give advice to the lovelorn. They edit household departments. Clubs, cooking and clothes are recognized as subjects particularly fitted to their intelligence. They are graciously permitted to make the most out of the special article and feature story. But only a determined few ever attain regular membership on the reportorial staff. And fewer still usurp the authority of an editorial desk, or achieve the dignity and influence of an editorial writer.” 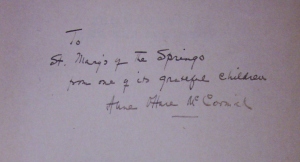 McCormick sent a signed copy of her 1928 book, The Hammer and the Scythe: Communist Russia Enters the Second Decade, to the school, inscribing it “To St. Mary’s of the Springs from one of her grateful children.”

A November 19, 1928 note from McCormick to Mother Stephanie Mohun, O.P. is tucked inside the book. McCormick begins her note, written from the Miami Hotel in Dayton, by saying:

“I am sending by the post a copy of the book on Russia I was working on last spring. It has just come from the publishers, and one of the first copies must go to St. Mary’s Library as one of the grandchildren of my old Alma Mater. It was in that library that I first learned that there was such a place as Russia and such a thing as a Revolution – so here’s one of the side effects of planting some seeds of knowledge!” 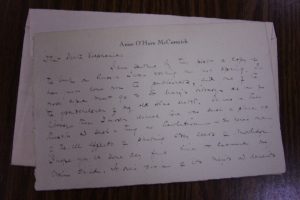 After McCormick died on May 29, 1954, her obituary in the New York Times the following day included tributes from journalists and statesmen alike. “Mrs. McCormick was a truly great reporter, respected at home and abroad for her keen analysis and impartial presentation of the news developments of our day,” President Dwight D. Eisenhower was quoted as saying.

The Anne O’Hare McCormick Collection was established at the library of St. Mary of the Springs, now Ohio Dominican University, after her death. Over 60 books that once belonged to McCormick cover topics such as Christianity, democracy, foreign affairs, the environment, public opinion, the River Jordan, and women’s suffrage. McCormick’s copy of Harry Truman: A Political Biography, by William P. Helm and published in 1947, is inscribed, “I enjoy your column immensely. H. Truman.”

Other featured items are a certificate of her official appointment as representative to the first session of the United Nations Educational, Scientific and Cultural Organization (UNESCO), dated October 16, 1946 and signed by President Harry S. Truman. It also contains a medal and decree from the National Order of the Legion of Honor awarding her the rank of Chevalier, dated November 18, 1946 and signed by French President Georges Bidault. The citation accompanying her Theodore Roosevelt Distinguished Service Medal noted that she had “done more for enlightenment of the American public in international affairs than most secretaries of war.” 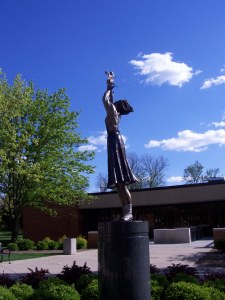 After work today, I visited librarian Mary Ellen George at Ohio Dominican’s library to see some of these special items for myself.  On my way to the library, I admired Spirit of the Springs, an elegant sculpture that Alfred Tibor created in 2010 to honor the history of St. Mary of the Springs, which he dedicated to the school’s “alumnae and Dominican Sisters in celebration of the spirit they have carried into the world.”

For more on Anne O’Hare McCormick, see The World at Home: Selections from the Writings of Anne O’Hare McCormick, edited by Marion Turner Sheehan (Alfred A. Knopf, 1956); Anne O’Hare McCormick: One Woman’s Path to the Pulitzer Prize, Wendy J. Hoskinson’s 2005 thesis for her master’s degree from Ohio University, and J. Douglas Tarpley’s essay about McCormick in American Newspaper Journalists, 1925-1950 (Dictionary of Literary Biography, Vol. 29).  McCormick’s papers, including correspondence, lectures, editorials and columns, are housed at the New York Public Library.

If you’d like to see the Ohio Historical Marker commemorating McCormick and St. Mary of the Springs Academy, visit 2320 Airport Drive in Columbus.

2 Responses to Anne O’Hare McCormick: The “Grateful Child” Who Won the Pulitzer Prize