Whenever I caught my first glimpse of the downtown Columbus skyline on a weekend or holiday drive home from Oxford, I’d hum “Lights (When The Lights Go Down In The City).” It isn’t by the bay, but I certainly did want to be there in — and get back to — my city.

Last week, I hummed Journey’s 1978 hit single once more, when I beheld the sun shining on my city by the freeway. The great bird’s-eye view is one of the hidden gems of the Franklin County Law Library’s newly renovated space on the 10th floor of the former Hall of Justice at 369 South High Street.

When Common Pleas Court moved to a new location across Mound Street, the building that opened in 1973 was gutted and renovated for over two years, and the library took up temporary quarters in the nearby Municipal Court building. Last October, the library returned to much of its original space and reopened. Now, the previously windowless collection of rooms is a bright, tidy place where staff members help Franklin County employees, members of the legal community and the general public conduct legal research using a collection that includes 19,000 print volumes, five legal research databases and 34 e-books of popular legal titles.

In the Reading Room, you’ll find the historical archives of the library, which document its activities since Pits incorporation in 1887. Early volumes of Laws of Ohio, Revised Statutes of Ohio, Ohio State Bar Proceedings and pre-1880 works on Ohio and Northwest Territory laws are also shelved in this room. General reference works like encyclopedias, city directories, dictionaries, almanacs and telephone books for Ohio metro areas are close at hand.

Historical photographs of judges line many of the library’s walls. Volumes of a special collection on influential trials and legal works are housed in an elegant cabinet near the entrance. Anatomical models displayed behind the circulation desk can be checked out by library cardholders for use in trials involving bodily injury.

In 1972, the library was outfitted with a suite of furniture from the Viking Oak line manufactured by the Romweber Company in Batesville, Indiana from the 1930s to the 1980s. Today, the pieces inspired by Scandinavian folk art are highly collectible. It’s worth a visit to the library just to admire its Viking Oak collection of over 50 barrel-back chairs, a sofa, love seat, a bench, swivel chairs, club chairs, wingback chairs, eight 9-foot tables, three 5-foot tables and 11 end tables.

looks especially spiffy beside a card catalog that was repurposed as a table. 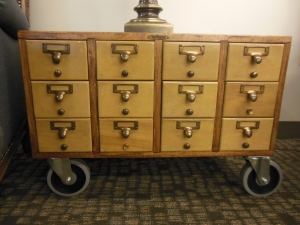 Thanks to the Art in Public Spaces program, the Columbus Museum of Art has loaned two pieces of artwork from its collection for display in the library. Ferdinand Feldhutter’s “The Konig Sea,” an 1882 landscape painting that was originally owned by Francis Sessions, hangs above the reference desk… 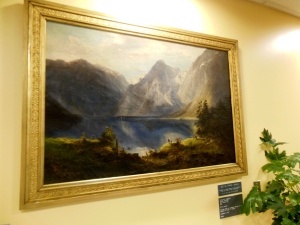 while a circa-1700 bust of Christopher Columbus stands outside the library’s entrance.

The Franklin County Law Library is open Monday through Friday from 8:00 a.m. to 5:00 p.m. This year, it is offering a series of lunchtime programs on a variety of topics, including a discussion of William Landay’s 2012 novel, Defending Jacob, on September 16 and Franklin County Courthouse stories told by former county prosecutor S. Michael Miller on October 7. For more information, click here.

This entry was posted in Columbus, Libraries. Bookmark the permalink.