High On Stress? Bring It Down On Dublin’s Irish Fairy Door Trail

As I staggered out of Dublin Methodist Hospital for the second time in a week, I decided that my wardrobe is sorely lacking without a “High On Stress” t-shirt like Dudley “Booger” Dawson wore in Revenge of the Nerds.

While I dodged the bullet until my next visit, just the thought of a potential repeat performance of my “significant medical event” called for some mind-diverting retail therapy.  I got it together and headed straight for Ha’Penny Bridge Imports of Ireland, my source for Irish clothing, accessories, giftware — and my Celtic tattoo — in Historic Dublin, Ohio. 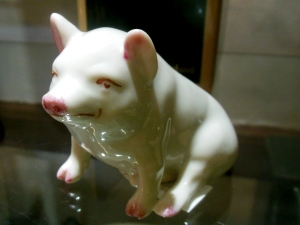 It was high time to pet Mr. Gleine’s Belleek pig, a classic Irish symbol of good luck. In 19th-century Ireland, the family porker was often sold to pay the rent. A healthy, thriving pig — known as the “gentleman in the corner” — ensured against eviction.

But something different at Ha’Penny caught my eye this time. The store is a stop on Dublin’s Irish Fairy Door Trail.

Fairies, a favorite subject of Irish folklore, are invisible “wee folk” who bring good luck wherever they go. The fairies on the loose in Dublin are said to be trooping fairies. Fun facts about these fast-flying fairies are that they look like little people, wear pretty clothes, and they love to dance, sing and play their harps, fiddles, pipes and drums. They live on pancakes and honey. Raisins are their favorite snack. If you spot a cloud of dust, hear rustling leaves or detect the buzz of a swarm of bees, it could be fairies passing by. On moonlit nights, fairies dance in rings, those circles in the grass outlined by mushrooms. Toadstools appear wherever a fairy has set up a home. Leave a little milk out for them on the windowsill overnight and they’ll do their best to keep misfortune at bay. But watch out! They can always see you, and they enjoy playing pranks on people they like, such as tangling your hair.

Hawthorns, oaks and mountain ashes are trees with fairy connections. People often tie ribbons to the branches of these trees, hoping that fairies will bring them good luck. At Ha’Penny, I closed my eyes and made a wish at a Wishing Tree bedecked with green Irish-themed ribbons.

Then I got busy on the Irish Fairy Door Trail. Here’s how this clever activity works.

Pick up an Irish Fairy Doors of Dublin Trail Guide at the Dublin Visitor & Information Center, at 9 S. High St in Historic Dublin. First, snap your photo in the enchanted fairy garden and see how you look with fairy wings. Tag your pictures with #FairyDoorsofDublin to share your posts with Dublin’s fairy fans.

Then, put your hand on a Worry Plaque and turn your troubles over to the fairies. The plaque glows red when you place your hand on it and think about what’s bothering you.

When the fairies have heard it, the plaque glows green, reassuring you that your worry has been heard and everything will be just fine. Talk about perfect for habitual worriers like me!

Remember, the fairies are watching, so look high, low and right in front of you.

After you’ve found the fairy door at any of these locations, write the name of the resident fairy on your trail guide.

When you’ve found six of the eight fairy doors, return your completed passport to the Dublin Visitor & Information Center for a free “Fairy Doors of Dublin” t-shirt. Dublin-area residents can stop by the Dublin Convention & Visitors Bureau office on the second floor to redeem the passport for the t-shirt Monday through Friday, 8:30 a.m. – 5:00 p.m. Visiting out-of-towners can get their shirts by either stopping by the office or mailing in their completed passports.

It’s not Booger’s style, but it’s perfect for a worrywart who has to play the waiting game for the next few months.

If you’d like to attract an Irish fairy to your home, Ha’Penny sells fairy doors and dozens of miniature fairy accessories from The Irish Fairy Door Company. My homemade fairy door attracted a tomte, Scandinavia’s answer to the luck-bringing fairy, but that’s a different story.

For more on Irish fairies, check out Fairy and Folk Tales of Ireland, edited by William Butler Yeats; The Book of Celtic Myths, published by Adams Media; Leprechauns and Irish Folklore: A Nonfiction Companion to Leprechaun in Late Winter, by Mary Pope Osborne and Natalie Pope Boyce; and Too Many Fairies: A Celtic Tale, retold by Margaret Read MacDonald.

This entry was posted in Columbus, Ireland. Bookmark the permalink.