“I Hope You Have A Nice Time At The Park Today. Come Back Again Soon.”

Reading Liza Mundy’s Code Girls: The Untold Story of the American Women Code Breakers of World War II prompted one of those unrelenting quests of mine to see something for myself. In this case, it was the last remaining cabin where the Dayton, Ohio-based code-breakers lived. So it was off to Dayton, where I not only saw the cabin, but also discovered a wonderful, closer-to-home alternative to Greenfield Village: Carillon Historical Park. Those three elements so important to Ford are also in practice here — even the signage is similar — but they’re presented with some distinctive, clever riffs on the theme.

For example, an incredibly lifelike animatronic figure of Edith Walton Deeds welcomes visitors to the park, explaining why she and her engineer-inventor husband, Colonel Edward A. Deeds, founded this special place that opened in 1950. Entranced by the carillon she saw while traveling in Bruges, Belgium, Mrs. Deeds, an accomplished musician, was inspired to share this special music with her fellow Daytonians. The park’s 151-foot-tall, 57-bell carillon plays automated selections daily, and is also featured in original live concerts throughout the year.

Designed by the Olmsted Brothers, the landscape architects behind New York’s Central Park, the 65-acre campus contains several original historic buildings. Explore a one-room schoolhouse where first- through eighth-graders studied near Springfield, Ohio from 1896 until 1929. Learn about the 1840s Greek Revival architecture practice of making wood siding look like stone by adding sand to the paint. Marvel at buildings that sheltered the area’s first settlers, such as Newcom Tavern, once considered the best house built in Dayton in 1796 and now the city’s oldest standing building. Original furnishings inside include a circa-1810 cupboard that was used as Dayton’s first post office and a table decorated with swirl-painted graining.

A collection of rare and antique bicycles made in the Miami Valley includes the Dayton Motorwheel from 1917, designed to be enjoyed as a bicycle or a motorcycle, with a gas tank mounted over the handlebars and a motor.

Did you know that McCall’s magazines and dress patterns were once printed in Dayton? The park’s print shop recalls the Miami Valley’s role as a leading center of printing during the 1930s. Authentic, operating letterpress printing equipment is still used to produce an affordable, unique line of cards, writing paper and “narrow-minded notepads.”

While Henry Ford was designing the Model T in Detroit, Deeds was building the “Suburban Sixty,” his own motorcar, in the carriage barn behind his Dayton home.

He and a fellow National Cash Register employee, Charles Kettering, were joined by other engineers and inventors to design an electric system which could simultaneously operate an automobile’s lights, regenerate its battery and start its engine. Working nights and weekends on the project, the “Barn Gang” was so focused on inventing their automobile self-starting system that they neglected to change the phonograph, so “When You and I Were Young, Maggie” played over and over again. An exhibit inside a replica of the Deeds barn explains how the Barn Gang became the Dayton Engineering Laboratories Company (Delco). It also displays the world’s first electrified business machine, which NCR introduced in 1906, as well as over 20,000 parts needed to assemble one NCR payroll machine.

The Great 1913 Flood and what happened in its aftermath is uniquely explored in one dedicated building. A blue line above the front doors recalls how floodwaters from the Great Miami River reached 18.2 feet, trapping area residents in the upper stories and attics of their homes until they could be rescued by boat, and killing more than 360. Artifacts from the disastrous flood include a dress and veil made by a bride for her wedding that was to take place the day after the flood, and clothing belonging to an infant who was heroically rescued. Learn about the resulting flood protection plan from a would-be-animatronic surveyor named Arthur Morgan.

Cross a Dayton-built iron bridge from 1881, then a covered bridge built in 1870 over the Little Sugar Creek near Bellbrook, to see the office that once stood in downtown Dayton where tolls were collected for shipping and traveling on the Miami and Erie Canal. Inside, one of those nifty dioramas imagines what traveling on the canal might have been like.

The stones from the Miami & Erie Canal Lock No. 17, built six miles north of Dayton in 1833, were carefully numbered and repositioned in the original canal bed dug between 1825 and 1829, which still runs through the park.

Relive the Wilbear Wright experience with a visit to the newly reimagined John W. Berry, Sr. Wright Brothers Aviation Center. Featuring more Wright family artifacts on display than any place in the world, this superb attraction is not to be missed. 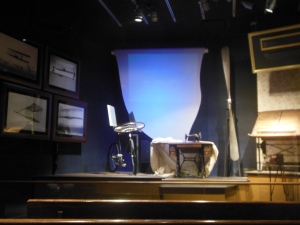 Enter through a replica of the Wright Cycle Company in Dayton, where Wilbur and Orville Wright designed and built a giant bicycle-built-for-two, as well as their first three airplanes. Admire woodcuts that the brothers carved on blocks of kitchen stove wood to use in their printing business, as well as photo-engravings of Wright bicycles and parts used in their bicycle catalogs. Overhear their sister Katharine’s telephone conversations. Surrounded by actual objects, such as the camera the brothers used to record their flight experiments, watch a short film that’s a clever, totally immersive experience.

Continue to Wright Hall and use what you just learned (think “Lift-Power-Control”) to understand what you see before you. For the best interpretive experience, see if John is on hand to explain. 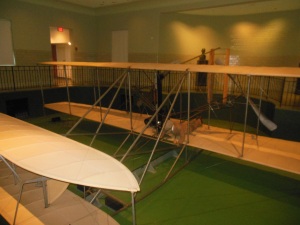 I, the world’s first practical airplane, a National Historic Landmark, and what Orville considered to be the most important aircraft that he and his brother built. On October 5, 1905, Wilbur used it to stay aloft over Huffman Prairie northeast of Dayton for over 39 minutes, longer than the combined total of all 109 of their previous flights. Orville suggested the building’s interior pit design, which allows you to see the airplane up close and from above, so you can understand how the controls worked.

In the final room, look upward to find the original canoe that Wilbur strapped to the Wright Model A airplane for his 10-mile exhibition flight up the Hudson River to Grant’s Tomb and back, as part of the Hudson-Fulton Celebration in 1909. He reasoned that if he landed in the water, the canoe could be used as a pontoon to keep the plane afloat. Orville later painted the red canoe green for use at his summer retreat in Canada.

Restaurants at Carillon Historical Park continue the theme. Culp’s Cafeteria, a Dayton tradition from 1902 until 1960 and was the first air-conditioned restaurant in Dayton, is honored in a modern-day recreation of the lunch counter. Carillon Brewing Company is the nation’s only fully operational production brewery in a museum.

As I left, I caught a glimpse of a circa-1832 printing office, the last surviving remnant of the Watervliet Shaker community, located in the area from 1806 until 1900. 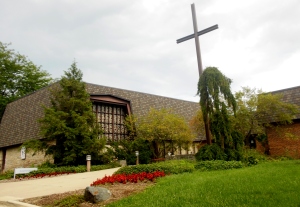 Some 80 acres of Watervliet property was purchased by Marianist priests in 1910.  Known as Mount Saint John today, the Bergamo Center for Lifelong Learning at 4400 Shakertown Road is home to an environmental education center, a gallery showcasing work by Marianists and other local artists, and a retreat and conference center. The property features walking trails and a nature preserve featuring over 130 different species of trees, as well as an abundance of native plants. It also includes the Our Lady of Lourdes Grotto, a replica of the grotto in Lourdes, France, and a labyrinth recalling one at Chartres Cathedral in France.

This entry was posted in Dayton, History, Museums. Bookmark the permalink.