Wrap up New England at “a beautiful place by the sea”

There’s a three-mile stretch of sand and dunes at Ogunquit, Maine, so named by the Abenaki Indians as “a beautiful place by the sea.” It curves alongside the Atlantic Ocean’s rugged coastline and continues past 70 oceanfront acres atop Bald Head Cliff.

This particular beautiful place by the sea was one spectacular place to spend our last night in New England. Welcome to the Cliff House on Cape Neddick, along the southern coast of Maine.

In 1866, post-Civil War reconstruction efforts included establishing a coordinated railway system. When the Boston and Maine Railroad added a spur to York, Maine, Captain Theodore Weare and his wife, Elsie Jane, invested in land on Bald Head Cliff upon which to build a resort. Using wood from family acreage that was milled in the family’s sawmill in Ogunquit, the Weares opened the Cliff House Hotel in 1872. Soon, well-to-do families like the Biddles of Philadelphia, the Havemeyers of New York, and the Cabots and Lodges of Boston were vacationing at the Cliff House, enjoying its performances of amateur theater and entertainment. A new generation of Weare family members modernized the resort in the decades to come, adding indoor plumbing, electricity, a bowling alley, and accommodations for guests’ automobiles. During World War II, guests were replaced by the U.S. Army Corps of Engineers, who built a radar station at the property and watched around the clock for Nazi submarines in the coastal waters. 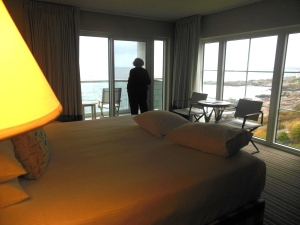 Today, the Cliff House offers custom-designed, nautically inspired luxury accommodations, each of its 226 rooms having private terraces on which to take in beautiful oceanfront views. Slide open the door to let in refreshing breezes and the soothing sounds of the sea while sleeping under Maine-sourced Cuddledown comforters and indescribably soft Comphy Company sheets. Cozy checked bathrobes complete the picture.

Take it from us: Ledges Room 465 was incredible. 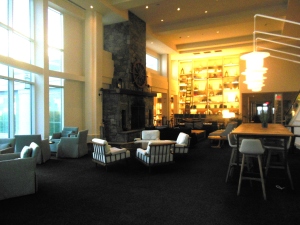 Lobster chowder, followed by Maine salmon on a warm grain salad with roasted tomatoes and rainbow chard, and finished off with an ice cream sandwich, never tasted so good as it did in The Tiller, the main dining room offering panoramic views of the Atlantic. In the morning, try the pear chutney with your breakfast.

Cliff House sends you on your way with some special souvenirs: the Wildflowers of Maine seed collection postcard series. Next season, we’re planting wild blueberries (“where rivers meet the sea”) and evening primroses (“nature’s tapestry of color”)

A luxury spa, swimming pools, an art gallery, a movie theater, a lobster shack, and access to golfing, biking, hiking, sea kayaking, fishing and lobstering are all available to Cliff House guests.

To recreate the experience of arriving at the Cliff House, watch the video on this page that was playing when we walked in our room.