In 1977, I Sat for Gary Ross; Now, Let’s Go on a Scavenger Hunt and Find His Sculptures!

No matter what the occasion, my dad knows what makes the perfect gift. Whether it’s a GPS to prevent getting lost on unmarked rural roads in Indiana or Michael Michaud’s Three Peas in a Pod necklace from the Taft Museum of Art, he generously picks out just the right thing for the occasion.

Perhaps his best and most special gift was something he gave my mother in 1977. That year, he commissioned Columbus sculptor Gary Ross to create a fired terracotta clay bust of seven-year-old me.

For three months, my mother took me to Gary’s studio after school several days each week. As I sat very still and looked straight ahead, Gary painstakingly worked on one small feature during each session. He carefully measured every dimension of my face and head, then replicated those measurements on a big hunk of clay that eventually took shape into something that bore an uncanny resemblance to me at that age. From my EJB monogram on my pullover uniform sweater to my barrette holding my thick hair in place, everything was exactly right. I remember being especially transfixed watching him craft the strands of hair with his sculpting tool. 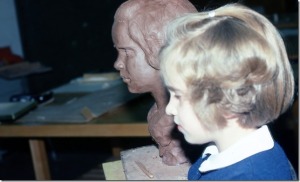 When Gary was finished, he salvaged a newel post from an old house on Franklin Avenue, two friends of his painted it with a faux marbling technique, and then he attached my bust to it. For years, it sat between the windows of our living room on Sycamore Street. Now, it looks out the dining room window and keeps an eye on our Worthington neighborhood.

My dad has always been a trendsetter with his friends. Soon after the bust was done, one of those friends commissioned Gary to create a life-size likeness of his Great Dane, Andy.  I was convinced that my happy childhood would come to a violent end under this massive dog’s giant paws or in its juicy jowls. Ferociously protective of his family, but always eager to greet guests, Andy would bound through their house to find me for what I was convinced was going to be his afternoon snack, knocking down whatever was in his path with an exuberant swing of his tail. While Andy is no more, his statue still holds court in his owners’ living room. I would have asked to take a picture of Gary’s Andy sculpture to share, but I am still terrified to be near it.

Watching Columbus Neighborhoods: Olde Towne East on WOSU-TV last week brought Gary to mind. Besides being an accomplished sculptor, he created a fabulous home and garden in this historic neighborhood where author James Thurber and painter Alice Schille lived. Not long before we met Gary, he had purchased his home, along with the house next door. He replaced the adjacent house with a garden, recycling bricks from the house to construct a patio and walking paths and salvaging architectural elements from renovation projects to create unique garden design features. He’s opened his garden to visitors during Olde Towne East’s annual summer tour of homes, and he talked about “Art and the Garden: Making Gardens Permanent” at the Columbus Museum of Art’s 2007 “Art in Bloom” event. Even though Gary didn’t appear on WOSU’s program, we knew he was an important part of making his neighborhood the special place that it is.

All this thinking about Gary prompted me to indulge in one of my favorite pursuits. So, during the past week, I’ve been on a scavenger hunt to track down some examples of Gary’s work that are located in Columbus.

Around the same time as Gary worked on my bust, he sculpted The Power and the Glory for First Community Church in Grandview Heights, as a memorial to the Reverend Richard J. Conrad, who was a minister at the church from 1964 to 1974, given by his wife, Janet Conrad. Look up and you’ll see it hanging from the ceiling of the church’s Garden Gallery, outside the Weist Room.

In 1982, Gary captured Ohio Governor James A. Rhodes striding toward the Statehouse, holding a briefcase in his right hand. The statue is located outside the Rhodes Office Tower on East Broad Street in downtown Columbus.

Gary sculpted a statue of St. Anthony in 1985. You can see this depiction of the saint on the campus of Capital University in Bexley, holding a book in his left arm and a piece of bread in his right hand.

Walk a few steps and you’ll spot Gary’s rendition of the Capital University seal on the sidewalk in front of Blackmore Library. 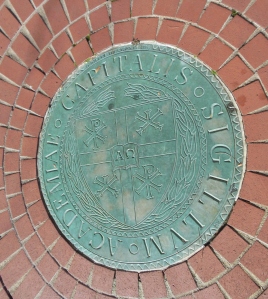 To Honor the Immigrants is my favorite Gary Ross sculpture. If you’ve visited Battelle Riverfront Park, across from Columbus City Hall and near the Santa Maria replica, you might have seen this 1992 work. 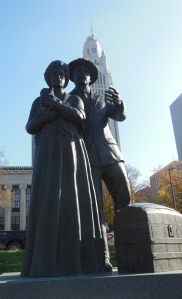 Gary crafted a bronze bust of Louis Bromfield, the Pulitzer Prize-winning writer who practiced transformational agricultural conservation techniques at Malabar Farm, for the Ohio Department of Agriculture complex in Reynoldsburg in 1996. The communications office was nice enough to send me this photograph of it.

In 2006, Franklin University commissioned Gary to create a series of life-size statues in the likeness of selected Franklin students to express the global diversity of the student body. Ross’s statues honored students in Franklin’s military program, community college alliance and campus-based programs. In July 2007, the university dedicated the first two statues in this series by honoring Scott Martin and Linda Peltier. A third statue of Pamela Watkins was dedicated in April 2010. All three statues are located in Franklin’s Phillips Hall, on the corner of East Main Street and South Grant Avenue. 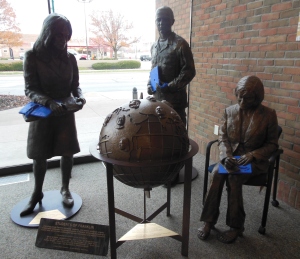 There are plenty more Gary Ross works that I have yet to track down. A statue of St. Matthew and a figure of Jesus hanging from a crucifix are at St. Matthew Catholic Church in Gahanna. Gary created another figure of Jesus on a processional cross for the Church of the Resurrection in New Albany.

Outside the Student Center at Wittenberg University in Springfield, you can see Gary’s 1991 statue of Wally Witt, a male student wearing a Varsity W letter jacket who’s resting his left hand on a book.

Wally Witt, Jr., a model sculpture Ross completed in April 1986, is on display inside Wittenberg’s Student Center. The wall on which the sculpture is sitting was created by Deron Tagg and Kenny Lake, two Wittenberg employees who work in the university’s Physical Plant.

In Cleveland, there’s Gary’s 10-foot statue of Bob Feller pitching for the Cleveland Indians. According to “Statue of Cleveland Indians Pitching Great Bob Feller, by Capital University Professor Gary Ross, Awaits Dedication at Cleveland’s Jacob Field,” from the March 30, 1994 edition of The Columbus Dispatch, Gary won a competition sponsored by the Cleveland Sports Legends Foundation to create this sculpture. Using photographs he found at the library, Gary sculpted the pitcher’s figure over an iron armature. When he had finished it in clay, Feller came to the studio and the pair made some modifications to achieve the desired result. While Gary originally had Feller holding the ball in a curveball position, Feller thought his fastball grip would be better.  Gary produced a baseball, Feller demonstrated his fastball grip and Gary traced Feller’s fingers on the ball, resulting in a more satisfying depiction of “Rapid Robert” at work.

Besides being a sculptor, Gary is a plantsman. Read about how he designed his garden in “A Magical, Classical Garden in Columbus,” an article by Jeanne Conte in the February 1990 issue of American Horticulturist.

This entry was posted in Art, Columbus. Bookmark the permalink.

7 Responses to In 1977, I Sat for Gary Ross; Now, Let’s Go on a Scavenger Hunt and Find His Sculptures!