Green Lawn Cemetery contains many distinctive headstones. Two standing a few rows behind the burial plot of 23 of my Heinmiller ancestors took me on the kind of treasure hunt that Special Collections librarians love.

Section P, Lot No. 1 is the final resting place of Lucas Sullivant (1765-1823), the pioneer who surveyed the wilderness that is now Franklin County and laid out the town of Franklinton where the Scioto and Olentangy Rivers meet. Other members of his family are buried there too, including his first child, William Starling Sullivant (1803-1873).

Learning about William Starling Sullivant through archival documents, rare books, historical objects and biographical works had all the elements of a thrilling page-turner. His life featured romance, tragedy, intellectual adventure and the suspense of problem-solving. Stick with me as I tell you his story.

After graduating from Yale, Sullivant returned home to Columbus in 1823 to help administer his father’s estate. He worked as a surveyor; managed a limestone quarry, a grist mill and a saw mill; and directed a bank. In April 1824, he married Jane Marshall, niece of Chief Justice John Marshall. The next January, she died, following the birth of their child.

About ten years later, Sullivant became enamored of two new interests. One was Eliza Griscom Wheeler, a New York City lass 14 years his junior, whom he married on November 29, 1834. The other was botany. 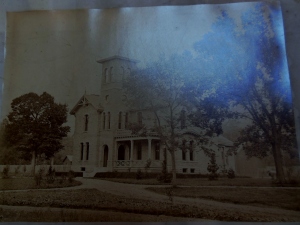 His early botanical endeavors included identifying flowering plants, grasses and sedges. When some plants proved challenging, he began corresponding with expert botanists like Princeton’s Dr. John Torrey and Dr. Asa Gray from Harvard, to help him describe them. Both professors sent him books; Gray gave him a microscope so that he could discern the minute features of the specimens he collected.

One of those specimens Sullivant discovered was a small plant with tiny, delicate white flowers and ornate leaves. In 1839, he found it growing in the crevices of high limestone cliffs over Paint Creek in Highland County, Ohio. To learn more about it, he tried cultivating it in his garden. He also shared the mysterious plant with Drs. Torrey and Gray, who described it as Saxifragia Sullivantii, in Sullivant’s honor. Concluding later that the plant was not a Saxifragia, they created the genus Sullivantia and changed the plant’s name to Sullivantia Ohioensis, or Sullivantia Ohionis as it was published. Today, the rare plant is known as Sullivantia sullivantii.

To document his botanical studies, Sullivant pressed and dried flowering plant specimens to create a herbarium. Later, Sullivant donated his herbarium of vascular plants (about 10,000 specimens representing about 6,000 species of plants) to Dr. Gray at Harvard. Other segments of his herbarium are housed at the Herbarium of the Missouri Botanical Garden, the New York Botanical Garden Herbarium, and the Herbarium of the Academy of Natural Sciences in Philadelphia, I read.

Over 370 of Sullivant’s flowering plant specimens can be found at The Ohio State University Herbarium, so off I went on a field trip to 1315 Kinnear Road.

The specimens are meticulously labeled in Sullivant’s own handwriting with the name of the plant as originally identified. His labels also record that they were collected in Columbus, Ohio in 1840. Here’s a specimen of Sullivantia sullivantii that Sullivant collected. 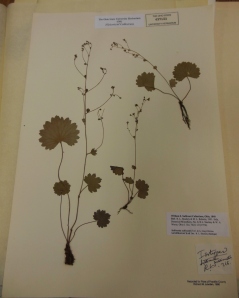 Sullivant wanted to exchange plant specimens with other botanists around the country, so he created a list of over 700 plants that he had personally collected and examined. In 1840, Columbus printer Charles Scott published Sullivant’s A Catalogue of Plants, Native or Naturalized, in the Vicinity of Columbus, Ohio. At the Ohio Historical Society’s Archives/Library, I paged through a copy that was inscribed, “R.L. Howard MD with the respects of W.S.S.”

Reading the list was like selecting choices for one of those nosegays conveying the Victorian craze for floriography, or the language of flowers. I wondered if Sullivant had ever presented Eliza with a bouquet of Sweet-brier, Virgin’s Bower, Harbinger of Spring, False Mermaid, Spanish Needles, Mad-Dog Scull Cap, Unicorn Plant, Painted Cup, Moccasin Flower and Ladies’ Tresses?

Then, Sullivant decided to study and collect American mosses. In 1843, he and Dr. Gray traveled to the mountains of the southeastern United States. What they collected during that field trip became the basis of Sullivant’s next work, Musci Alleghaniensis. In 1845, he issued 50 presentation copies of a bound, two-volume collection of sheets of dried specimens of mosses from the Alleghenies, from Maryland through Georgia, labeled in Latin. The next year, he published the text of the accompanying labels in a small volume with the same title, also in Latin. This accomplishment earned Sullivant a reputation as a budding bryologist.

Eliza joined her husband on his field work, helping him examine plants, mosses and liverworts under a microscope. She also lent a hand in drawing pictures, writing Latin descriptions, and preparing specimens for his herbarium. To recognize her contributions, Wilhelm Schimper, an authority on mosses, named a new moss Hypnum sullivantiae, which the Sullivants discovered on rocks and in the woods of central and southern Ohio, I learned during my reading.

When a cholera epidemic reached central Ohio in the summer of 1850, the Sullivants ventured north to Mount Vernon to steer clear of the disease. However, 33-year-old Eliza succumbed to it and died. Sullivant commissioned an Italian white marble headstone for her grave. It features a carved likeness of Eliza, framed by an ornately carved wreath of Sullivantia sullivantii. A carved wreath of flowers is draped over the top.

A few years after Eliza’s death, Sullivant published an edited version of his contributions to the section on mosses and liverworts in Dr. Gray’s Manual of Botany. The Musci and Hepaticae of the United States East of the Mississippi River includes eight detailed copperplate engravings of Sullivant’s own illustrations.

Later, Sullivant collaborated with Leo Lesquereux (1806-1889), a Swiss watchmaker and jeweler whose boyhood hobby was collecting flowering plants for his herbarium. Later, Lesquereux became interested in bryology. In 1847, Lesquereux came to Boston, where he worked for a short time as the curator of Dr. Gray’s herbarium. The next year, Sullivant hired him as a field and laboratory assistant, and he moved to Columbus. He and his wife — a former baroness whom he had tutored in French — lived at 384 South Fourth Street. Although the house was razed in 1923, you can read more about Lesquereux and his home in Bill Arter’s Columbus Vignettes III, from my favorite series of books on Columbus history.

Sullivant and Lesquereux co-authored Musci boreali-americani quorum specimina exsiccata in 1856. Looking at Sullivant’s copy of the book at the Ohio Historical Society’s Archives/Library, I gasped, “Oh, wow!” Penciled-in marginalia covered the bottom of page 28. It was almost enough to give me the “trembles.”

Next to the entry for Orthotrichum Texanum, Sullivant had written a note: “How did this error creep in? By Lesqx. or me? Or both? Stupid!!!”

Underneath a drawing Sullivant had made of a pointing finger and three question marks, another handwritten note dated September 1862 and signed by “W.S.S.” corrected the entry to Orthotrichum sturmii. The descriptive Latin text he provided was far beyond what I remembered of the four years of Latin I took at CSG.

Now, I’m no botanist, so I had to perform some limited detective work to see how Sullivant had resolved this. Following a lead, I consulted the second volume of Mosses of Eastern North America, by Howard A. Crum and Lewis E. Anderson (New York: Columbia University Press, 1981). There, I learned in the notes for the Orthotrichum rupestre entry that these small, fairly robust, dull dark-green or brownish plants typically grow in tufts, on rocks and cliffs in coniferous forests. Under the “Exsiccati” (Latin for “from the dried”) section of the note, our hero and his helper are listed. They referred to it in the first and second editions of Musci boreali-americani as O. sturmii and O. texanum.

Looking at a few rare copies of Sullivant’s books was just the beginning. I also spent some quality time sighing over four of Sullivant’s possessions — all dating from about 1840 — in the Ohio Historical Society’s History Collections. Besides two unphotogenic circular pieces of glass that Sullivant used to press plants, I admired his bronze and glass dial calipers (H 23116)… 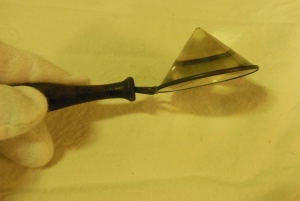 … and his brass microscope (H 79136). An engraved inscription signifies that it was made by Charles Chevalier of Paris, France. 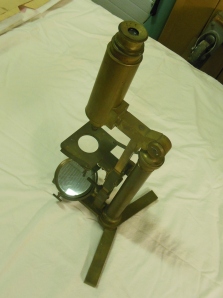 It’s too soon for the next stop on my William Starling Sullivant treasure hunt, so here’s a preview of coming attractions.

Besides happening upon Sullivantia sullivantii, Sullivant discovered the Spreading Rock Cress (Arabis patens) and the Flat-stemmed Spikerush (Eleocharis compressa), among other new species of plants. In honor of his many botanical and bryological accomplishments, several plants were named for him. One is Sullivant’s Milkweed (Asclepias sullivantii).

This showy, rose-pink wildflower typically grows in native tallgrass prairies. It blooms in July and sometimes into August. Until I can track down this rare, endangered plant myself, Jim McCormac shared this photo so you can see what it looks like. You can read his blog post about it here.

The Sullivant-Starling Collection (MSS 459) is housed in the Ohio Historical Society’s Archives/Library. While the majority of the collection documents Lucas Sullivant’s work as a surveyor, it includes financial receipts from William Starling Sullivant’s education at Yale; correspondence from people who wanted to exchange specimens of mosses with and discuss his writings; an 1868 letter from Asa Gray; letters from Leo Lesquereux about plant sitings along the eastern United States; and letters from Eliza to her sister in New York City describing the purchase of furnishings for Sullivant Hill.

The papers of Joseph Sullivant, William’s brother who planned Green Lawn Cemetery and initiated the state-supported college that became the Ohio Agricultural and Mechanical College, now The Ohio State University, are also enlightening. See the finding aid for MSS 220 at the Ohio Historical Society’s Archives/Library.